Freemasonry came to Grantown in 1811

On 6th May that year, Grand Lodge of Scotland issued a charter founding Craigelachie (sic) Lodge No.317. The inaugural meeting was held at Duncan Grant’s farm at Lettoch, Abernethy. All subsequent meetings took place in Grantown at a variety of venues, although sadly most of these are unrecorded.

The Lodge was created under the Friendly Societies Act 1793 and existed as a credit union to provide benefits to members and their widows such as annuities and death benefits. The annual subscription was due on St. John’s Day, 7th January, and known as Quarter Pennies.

A joining fee was required but seven of the fifteen founding members were exempted. This fee varied from time to time and in 1834, for example, was two shillings (10p). The benefits of membership included an allowance of meal during periods of hardship. The post-meeting assemblies or” harmonies” were convivial affairs.

The number of members rose quickly to more than 100 and when the Earl of Seafield joined, numbers rose more significantly. By 1855 664 had joined but the turnover was also high so the core of members was never great.

Eventually financial indiscipline led to its collapse. The lodge was liquidated in 1855 with a small distribution to the remaining members. Few received their share for the non-mason lawyer handling the liquidation absconded with the funds and accounts, a not uncommon occurrence in Scotland in the mid-19th century. Its last Clerk (not to be confused with the Lodge’s Secretary) was James Findlay who died in 1864.

In 1881 James Findlay, a son or relative returned to Strathspey from an unsuccessful emigration to Johannesburg, South Africa. During 1882 freemasons in the town met with a view to reviving the lodge. Members of Craigellachie Lodge #241. Grantown-on-Spey The group met on 24th February 1883 at an unrecorded venue resolving to meet to re-start the lodge in the Ante Room of the Town Hall, the building (where Maclean’s Bakery et al are sited today) on 6th March 1883. A preliminary meeting took place on 1st March. Inclement weather on 6th March led to the postponement of the meeting to 14th March 1883. James Findlay of Hotel Abernethy made them aware that he held original charter. The proposed lodge met at Hotel Abernethy on 23rd March 1883 under the chairmanship of James Grant of Birchfield.

On its presentation to the Grand Lodge of Scotland, an amended charter would be issued with the proviso that a debt of £8 from its former incarnation was first paid. The reformed lodge re-started life on 27th December 1883 having elected Peter Scotland as its Right Worshipful Master. 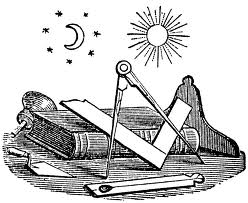